Chicago, IL – Ever since humans began engineering buildings, the Earth has been knocking them down. Before starting any major construction project, engineers must evaluate the building site’s seismic activity and propose an appropriate design. Although poorly-built structures can sometimes resist vertical loads, horizontal loads cause the worst damage, often collapsing buildings on the first shake.

To earthquake-proof buildings, engineers must ensure that the structures and their foundations are resistant to potential horizontal loads by employing a number of key design features: 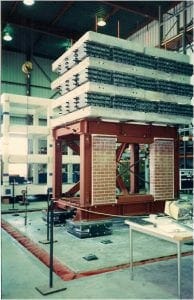 Diaphragms are the primary component of a building’s horizontal structure, including the floors and the roof. To earthquake-proof a building, diaphragms must be placed on their own deck and strengthened horizontally to share forces with vertical structures.

Trusses strengthen the diaphragm where the deck is weakest. Simply put, they are diagonal structures that are inserted into the rectangular areas of the frame.

Engineers incorporate a variety of columns, braces, and beams to transfer seismic forces back to the ground. Cross braces incorporate two diagonal sections in an X-shape to build wall trusses.

To help resistance swaying forces, engineers use vertical walls, known as shear walls, to stiffen the structural frame of the building. These can be used in place of braced frames or in addition to them.

As a general rule, the roofs of earthquake safe structures must be as light as possible. Many builders prefer profiled steel cladding on light-gauge steel Zed purlins or a double-skin with insulation and spacers.

Engineers around the world continue to test new design theories to produce buildings that can withstand the worst natural disasters.  Researchers at Stanford and Northeastern University recently tested a new system on a 26-foot tall with the world’s largest earthquake simulator in Japan. Instead of structural elements, steel fuses absorbed the shock of an 7+ magnitude earthquake and cables pulled the building back into place when the shaking stopped. These are the types of buildings that will solidify the next step in environmentally-sustainable construction. As one of the participating San Francisco engineers, Jim Malley, put it, “our sustainable design is the ability not to have to tear buildings down after earthquakes, but to use them for hundreds of years.”